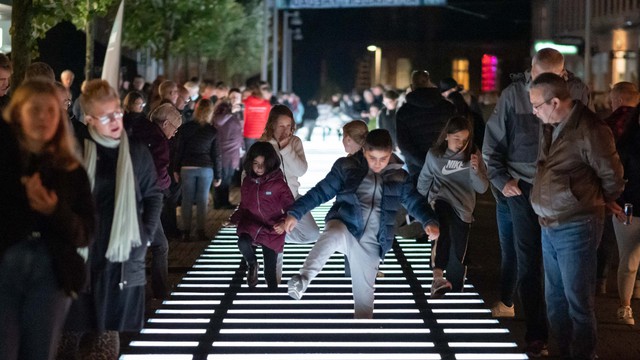 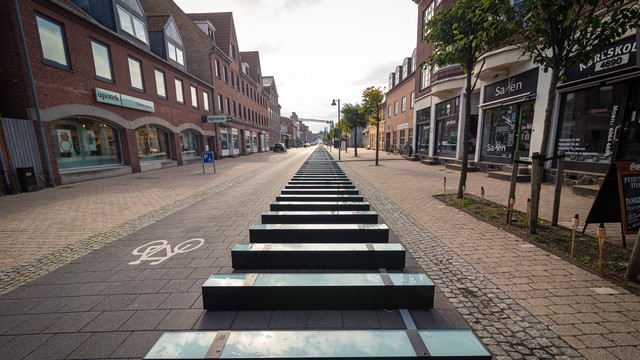 The 150th anniversary of the introduction of the railway in the Danish city of Haslev. That’s a 150 meters long light installation consisting of 150 luminous railway sleepers reminding of 150 important moments from the history of the city.

There is always a thorough thinking process before we start designing our works. In this case we were originally asked to create a video mapping show, but eventually we decided to talk the local authorities into creating something fresh, unseen before. The final work made of glass and metal has a form of 150 illuminated railway sleepers. Texts reminiscent of 150 important moments from the history of the city gradually shine through each of the sleepers after dark. The work creates an illusion of a railway going through the city’s main avenue. The sleepers are equipped with independently controlled LED stripes and connected together in a sequence. The control system collects data from a simple b&w schematic video which controls the final light pattern. This allowed us to create multiple visual sequences without any extensive programming. The installation included an audio part as well. The foil with text stuck to the covering glass is semi transparent, thus the texts are only seen as soon as the lights inside are on. This brings another tiny element of mystery to the work. Since it was a 150th anniversary we decided to create 150 sleepers. To enhance the narrative layer we put a text describing selected moments from the history of the town on every single one of them. The viewers could walk past the installation and browse the historical moments from the year 1870 until present. The final show presented at the event consisted of four different themes. Firstly a mellow ambient theme which was used in a “viewing” mode. In such time the audience could walk along the work and read the texts freely. Other three themes were more dynamic, based on soft downtempo music, using railway sounds to raise a pleasant emotion of a real incoming train. Last but not least one of the features of the installation is its durability. The idea was to create something versatile which can be used as a one time installation at the event, but also as a permanent memorial. At this point there’s an ongoing discussion between the studio and the Haslev authorities searching for a suitable final site for the work. “The Haslev authorities asked us to make a video mapping in the first place. But we kinda hesitated to create another one-time installation which comes once and disappears immediately. Thus we suggested a piece which will remain, not only as a memorial of the anniversary, but also as some kind of a chronicle of the significant historical moments of the city. A chronicle the audience can browse like through a book.” – Josef Lepsa, 3dsense art director and the author of the installation

Issues addressed : 150 important moments from the history of the city

Impact : The installation has a clean, simple design which is comprehensible to all audiences. We dare say that we’ve successfully integrated three key elements into the work – the straight connection to the topic of the celebration, induction of a sense of belonging to the city among the audience and a tasteful, attractive and innovative design.

Next steps : Find the right place in the city of Haslev and make the light installation permanent.