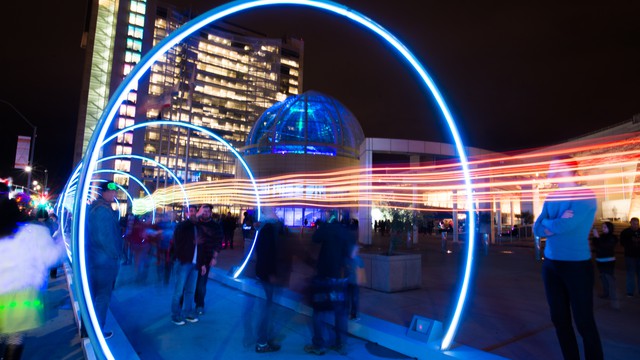 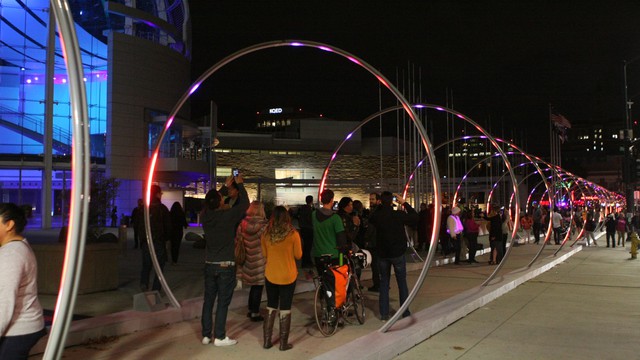 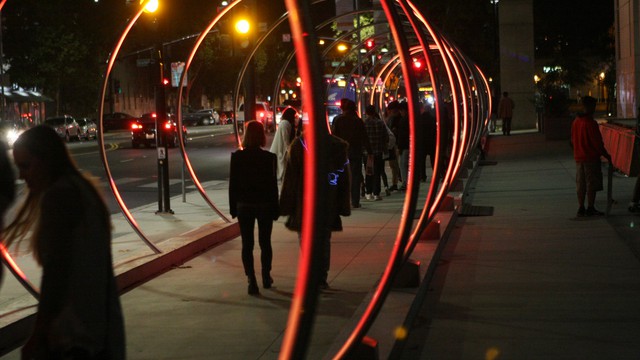 A unique experience awaits visitors at the Richard Meier-designed City Hall in San Jose, CA. In front of this, the tallest building in San Jose, with an adjacent glass-domed rotunda, the Sonic Runway treats pedestrians to a stunning light display visualizing a typically unseen natural phenomenon: the speed of sound. The Sonic Runway invites you to walk through its long corridor of arches, listening to the music and basking in the every-changing patterns of light racing down its length. Standing at the front of the Runway, observers can watch the beats of music as they ripple along the arches. As you walk down the corridor, no matter where you are, the sound and the light are in sync. Looking back from the far end, you can see the sound coming at you, hearing the beat just as the pattern reaches you. The experience of observing the speed of sound will bring a smile to your face, and with it, the desire to share this experience with others.

The Sonic Runway is a 432' (131.67m) long corridor of 25 concentric steel arches spaced 18' (5.48m) apart, placed along the sidewalk. Each arch of the Sonic Runway stands 11' (3.35m) tall, 12' 10" (3.91m) wide, 2.85" (7.3cm) deep, and contains 554 addressable LEDs, which feed back to a master controller that drives the entire installation. Live audio input, from either an integrated sound system playing music or an external microphone used by a performer, is analyzed in real time and converted into a variety of intricate patterns, driven by TouchDesigner software, which are timed to race down the corridor at the speed of sound (about 343 m/sec). The patterns can be cycled through automatically, or be manually controlled with a tablet interface, allowing individuals to personally control which patterns appear on the Sonic Runway.

Community or communities involved : The Sonic Runway was built by a small group of artists for the Burning Man event, held annually in the Black Rock Desert in Nevada, USA. Through a collaboration with the San Jose Office of Cultural Affairs and Burning Man Project, the Sonic Runway was invited to be the inaugural installation for an ongoing program of installing Burning Man art throughout San Jose, with the goal of activating underutilized public spaces. The Sonic Runway's initial three-month installation in 2017 in front of City Hall was a huge success, bringing foot traffic to a previously avoided location, enhancing the sense of community and revitalizing the area. The impact of the Sonic Runway on the citizens of San Jose was so overwhelmingly positive, the city commissioned an updated Sonic Runway (building is underway) to be semi-permanently installed in the same location, once pandemic restrictions are lifted.