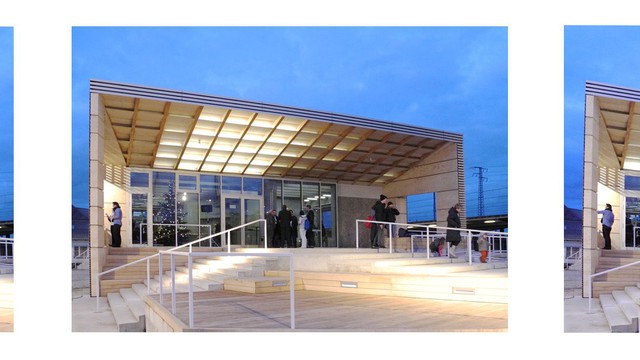 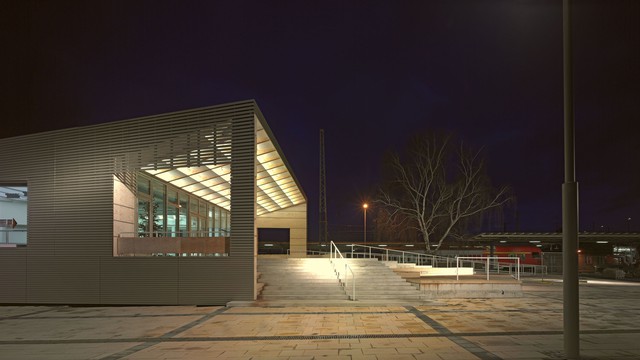 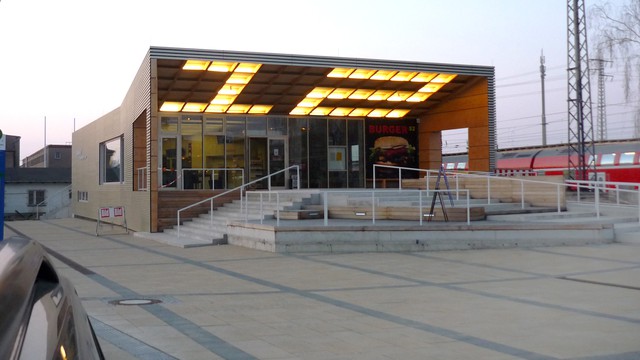 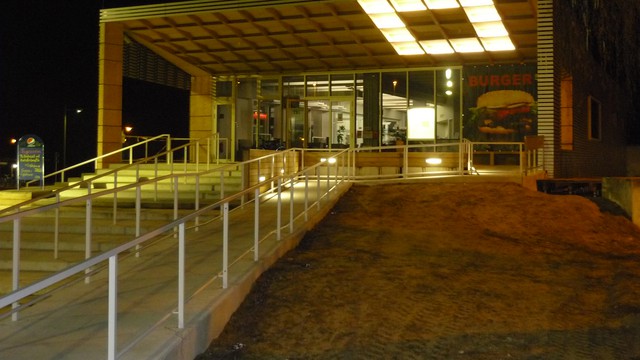 A small train station after hours. A porchlike roof consisting of wooden squares above your head. All squares are lit by fluorescent lights that dim up and sometimes down. Slowly. Some lights within the building also change by intensity from time to time. Are there still people inside working at that time of the night...? When was the last time you found yourself waiting at night time at a midsize train station in the far country side in eastern Germany? Maybe a long time ago or never. We were asked to redesign an existing train-station building. Our goal was to provide a space of positive - almost entertaining - ambiance in this somehow inhospitable environment – especially at night.

We decided to work with the lit insisde-space of the building and also with the cantilevered outside-roofs on both main facades. The construction of theses roofs that is visible from below consists of huge members of laminated timber. The spaces between this wooden members received a folded wooden cladding optimized to reflect the hidden fluorescent lights. We choose fluorescent lights because of the special light ambiance that is obtained when fluorescents wash over rough wooden surfaces. The inside ceiling light fixtures as well as the one on the outside are equipped with dimmable electronic ballasts controlled by Dali. After sunset the lights under both roofs – but not the lights inside – automatically start their program. The Dali-functions inside are programmed in such manner that the fixtures can be managed by standard wall-switches during service hours (ticket office and restaurant) according to the normal requirements of the user. When leaving the building the users simply turn the main switch and the ceiling fixtures immediately become part of the light moves that already have started on the outside roofs. The light programs consist of slow random patterns that were developed and work well together with the spatial condition of the architecture. They do not convey “information” in a classical meaning they rather inform the architectural environment - by light. Then eventually two digits (minutes of the hour) are displayed on the roof: It's not a clock – it is more like a building that tries to get in contact with the persons waiting under its roof waiting for their next train to come. Individual perception of time makes time appear stretched or sometimes contracted – especially when one is in the state of “waiting”. Therefore this characters sometimes appear three times per minute or they do not appear probably for an quarter of an hour. Like your mum reminding you at unpredictable intervalls to to watch the time ... when you were little.