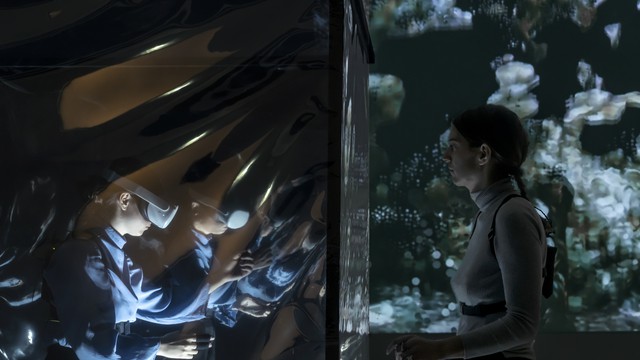 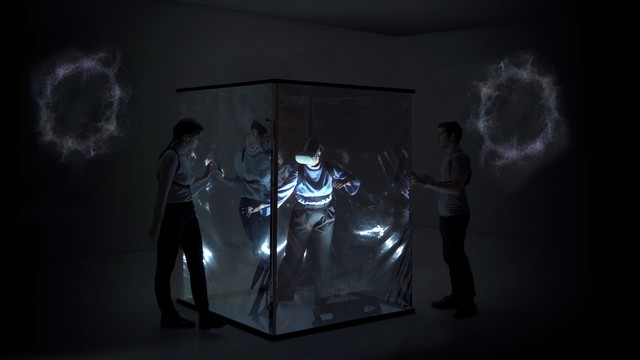 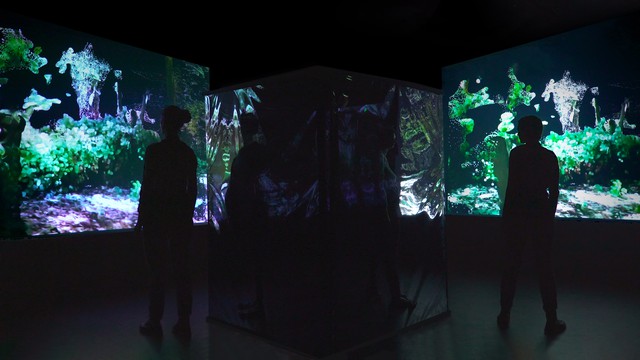 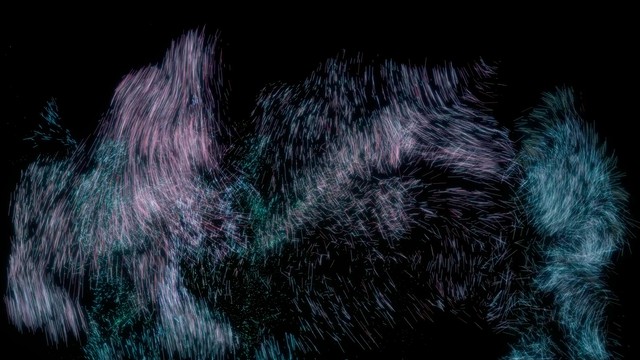 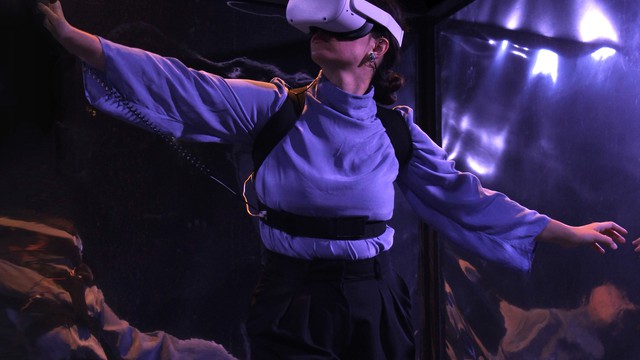 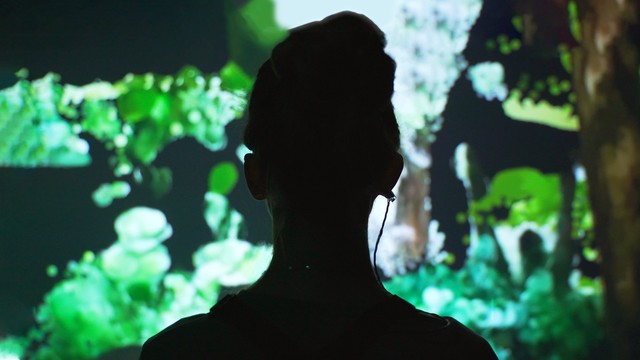 “Theatricality appears to be an almost fantastical cognitive operation set in motion either by the observer or the observed. It is a performative act creating the virtual space of the other […] allowing both the performing subject as well as the spectator to pass from "here" to "elsewhere”.”(Féral & Bermingham, 2002).

Inhibition is an immersive performance based on A. B. Casares’ novel “The Invention of Morel” that questions conventional theatre by dissolving the roles of performers and audiences. The narrative unfolds in three scenes following the journey of the main character, who confronts the limits of his perception and consciousness. Participants experience a deserted island, challenged to rethink their subjective reality. A combination of VR technology, biofeedback, and multi-layered audio-visual stimuli aims to encapsulate the dynamic relations between physical and virtual, actual and fictional. Responding to an alienation between the body and physical space often felt in VR, Inhibition seeks to reconcile this divorce by integrating participants’ biodata into the evolving creation of the visual landscape. A VR user and two further participants constantly re-shape each other’s inhabited space as biodata and movement affect the VR world. As a shared immersive experience, Inhibition invites the audience to become performers exploring their unconscious sense of agency. The project is currently in development with three participants. The main VR user wears a pulse, a GSR sensor, and a respiratory belt while the other two - the observers wear pulse sensors. The VR user is placed inside a wooden-frame cube and immersed in an environment of point-clouds inspired by scenes from the book. The visual scenery plays in sequence with audio effects and voice-over while it is projected in real-time in the room. Each scene focuses on different key points of the novel’s narrative and has distinguished visual aesthetics. By placing the project in the discourse of integrating immersive technologies in performing arts and storytelling, Inhibition is an opportunity to reflect upon levels of agency and engagement in theatrical experiences. Responding to the alienation between the body and physical space often felt in VR, our challenges focus on three main axes that we seek to further explore during the residency. Firstly, in reconciling this divorce by integrating participants’ biodata into the evolving creation of the visual landscape. How the complementary intersections between the body’s common and uncommon senses with VR technologies can create more subjective experiences? Secondly, in renegotiating the boundaries between performers and audiences through the implementation of interactive technologies in this process. Can audiences be more engaged with the performances? What does it mean to be simultaneously a performer and an audience in this era, where our bodies and minds are multiplied and translated through interactive interfaces, binary code, and repetitive loops? Lastly in creating a shared, inclusive, and collective experience that can be addressed to multiple audiences and adapt in diverse cultural environments.

Issues addressed : Inhibition is a groundbreaking immersive experience that aims to create a collective experience for the participants. It pushes the boundaries of conventional theatre by integrating immersive technologies to convey a story. We aspire to engage people with non-performative backgrounds to explore and interact with immersive technologies and become an active part of the performance. Inhibition targets to enrich the discourse of VR integration in theatrical performances by nonprofessional participants. The participants are invited to be immersed and explore new ways of storytelling as they embody the protagonists of the narrative. Furthermore, the use of biofeedback brings to the foreground the immense need for reconciliation with the participant’s body within the physical and virtual space.

Tools used : The software we use for the production of Inhibition is Unity, MeshLab, Rhinoceros 7, Agisoft, and Arduino IO. As for the hardware, currently, we have an Oculus Quest 2 along with a Link Cable, a Kinect, and a RealSense Camera. Also, we use three Arduino MKR1000 boards, a GSR sensor, a push, and three heartbeat sensors. Biofeedback is the key element of our idea that places the project also in the discourse of human perception, embodied cognitive theories, and the affordances of immersive technologies.

Next steps : We are thrilled to test new tools and see the emerging challenges. Up until now, our experiments were focusing on audio-visual outputs and interactions between the virtual and physical space with only three participants. Our goal is to create bodily-engaging feedback loops between multiple participants, implement further inputs (such as body movements, gestures, or kinaesthetic patterns), enrich the visual aesthetics, and consolidate a gradient of interactions. In long-term goals, we aspire to establish our own practice and continue our research, by finding support through networks that promote new ideas and methods for live performances.