An Urban Robot For Hybrid Placemaking 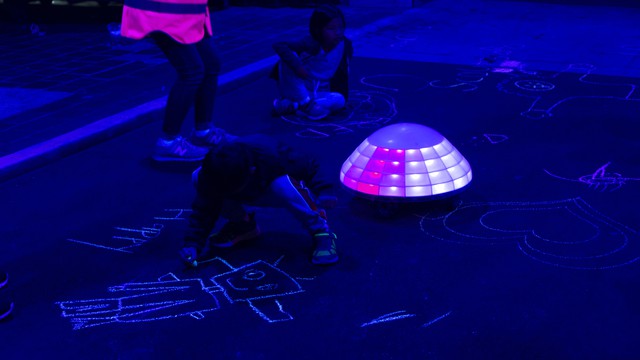 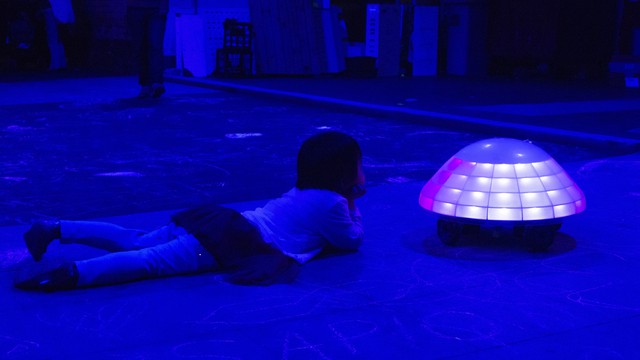 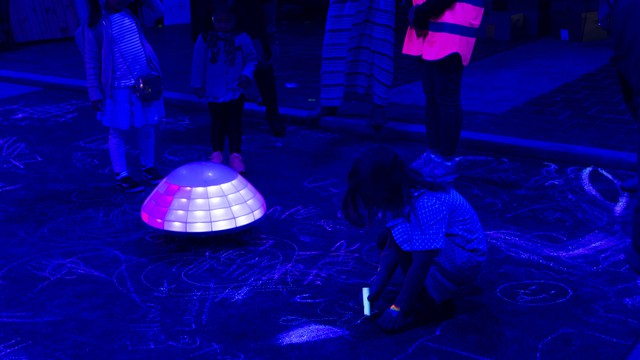 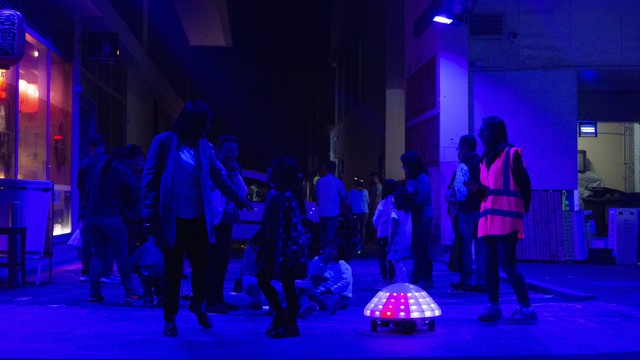 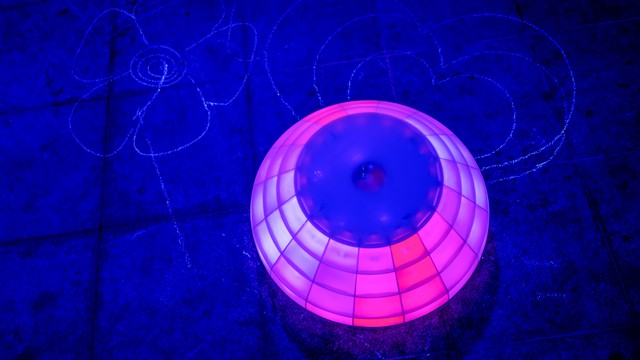 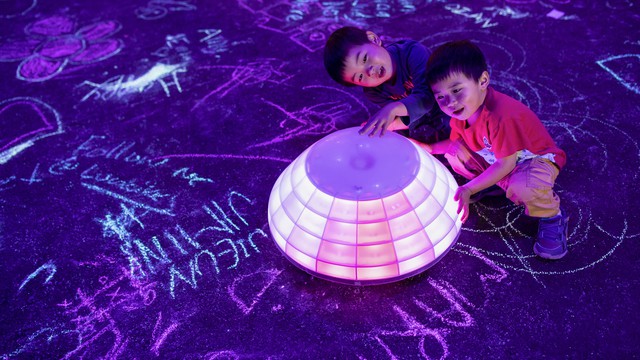 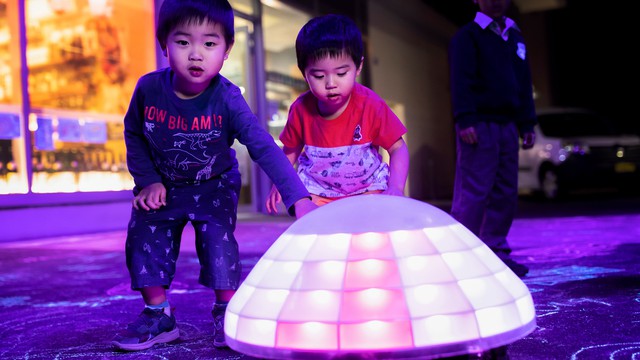 Woodie is a slow-moving urban robot that draws on the ground using luminescent sidewalk chalk. The area in which the robot wanders around is illuminated with ultraviolet lights. By producing simple line drawings, Woodie turns the surrounding public space into a large horizontal canvas made of glowing words and drawings. Through its iconic, luminous shell, Woodie attracts passers-by to stop and contemplate, and invites them to draw with it and other people. The installation explores novel forms of pervasive urban displays and interrogates the role of urban robots in social spaces.

Cities around the globe are increasingly turning to testbeds for urban robotic experimentations, however, mainly to perform mundane tasks. What if we design robots with the aim in mind to create more engaging, creative and playful public spaces? Instead of striving for ever-increasing productivity and efficiency in cities, the installation Woodie explores the potential of robots to trigger urban reflection and slowing down. Woodie was a temporary installation designed by Marius Hoggenmueller, Luke Hespanhol and Martin Tomitsch for Vivid Sydney - festival of light, music and ideas. From the outset of our speculative design approach, the goal was to create a robotic device which could render digital content in a physical form, seamlessly integrated into the existing urban environment. Research has shown that conventional public displays in cities are often ignored by people due to the oversaturation of digital screens in our lives. The installation Woodie, instead, combines high-tech and futuristic city designs – in the manifestation of an urban robot – with a low-tech and traditional form of urban storytelling - chalk drawings on the street. Capable of translating digital illustrations into simple line drawings, Woodie uses the public space as a large horizontal canvas. The drawing area was illuminated by high-power ultraviolet lamps. As the intervention took place in winter evenings, the drawings were created with luminescent chalk sticks, for greater visibility at night and increased aesthetic perception of the space. Woodie itself, measuring around 60 centimeters in diameter, has a low-resolution lighting display integrated in its outer shell. Through the visualisations Woodie can communicate with passers-by. Thus, the robot can let people know about its creative process, the direction it intends to move, or cheekily complain if someone blocks its path. To allow people to add their own drawings on the ground, chalk sticks were made available around the installation site. Woodie successfully attracted people’s attention and acted as a facilitator for collaborative, creative placemaking. We observed evidence of emerging learning and creativity among children, manifested through watching, and then copying and adapting, some of the patterns drawn by the robot. Furthermore, Woodie provoked emotional responses and was perceived as a living being: people were touching, performing in front of Woodie or even talking to it. Overall, the installation Woodie incorporates established media architecture design elements, for example in the form of the robot's integrated low-resolution lighting display, while at the same time indicating a shift in the field towards the integration of new technologies, here in the form of mobile urban robots.

Building or project owner : Design Lab, The University of Sydney

Kind of light creation : The lighting aesthetics of the installation is achieved through two active lighting components: (1) Six high-power ultraviolet (UV) lamps were installed around the drawing area. In combination with the luminescent chalk drawings, the laneway was turned into a magical space of glowing words and illustrations. A particular feature also emerged through the characteristic aesthetics of the robot’s drawings in comparison to those made by people. (2) A low-resolution lighting display was integrated into the outer shell of the robot. The display is inspired by the aesthetics of low-resolution urban media facades.

Resolution and transmitting behaviour : The low-res lighting display is composed of 16 pixels in width and 4 pixels in height. The display is integrated into the robot's outer shell, completely encircling the spherical shape. The size of the pixels at the bottom row are approx. 100mm x 40mm, with pixels becoming more narrow and higher towards the top. To make each pixel cell distinguishable from another we designed a laser-cut waffle structure. For a homogeneous diffusion within each pixel cell, we added a white reflector sheet behind each LED, and a diffused sheet at the front of each cell. To maximise the diffusion and create a nice finish, we sandblasted the custom-made vacuum formed shell. Emissions of the surrounding UV lights increase the perceived contrast of the low-res display. The RGB LED system (as well as all other hardware components of the robot) are powered by a 12 voltage / 12Ah Lithium rechargeable battery.

Urban situation : Woodie was deployed for 17 evenings in a usually quiet laneway situated within Chatswood which is a major business and residential district of Sydney. The laneway connects a cultural centre and two large shopping malls. During the day, the lane is mainly used for the delivery of products to a nearby warehouse, however, during the time of the festival the lane was pedestrianised and closed for traffic. The designated area in which Woodie was drawing on the ground was roughly 15 metres in length and 5 metres in width. Despite the complexity of integrating urban robots into public spaces, we achieved that Woodie had not to be fenced off which allowed people to come close to it and even touch it. To not compromise the pedestrian flow, slowness emerged as an important feature for Woodie.

Description of showreel : Video: https://vimeo.com/479453134 The video illustrates the motivation for the installation, critical aspects of the making process and on-site video recordings of the installation illustrating how people interacted with and around the robot in the activated urban space. Flickr: https://flic.kr/s/aHsmUCLWtz Photographs taken by the designer during the installation.

Community or communities involved : Woodie has been developed in close consultation with the Willoughby City Council who was responsible for hosting the festival in Sydney Chatswood. From the beginning of the project, the aim was to activate the not very populated laneway and connect people with the space and with each other. During the making, frequent on-site testing was necessary in order to tackle technical issues (e.g. making the robot move on the rough terrain of the laneway), but also to observe the urban situation (e.g. potential pedestrian flow). During the festival, Woodie gained growing popularity resulting in it becoming one of the event’s main draw cards. Woodie attracted considerable promotion in social and traditional media, and consequently a significant number of visitors from the local community and visitors from other suburbs were coming to see Woodie despite it being tucked away in a quiet laneway.

Tools used : Woodie has been developed using a range of open-source software platforms and digital fabrication tools. To achieve the drawing behaviour, we built on and repurposed Grbl, which is a freely available and open-source gcodeparser. Grbl is mainly used in computer-aided manufacturing, for example to control 3D printers and laser cutters. For programming and controlling the low-res lighting display we used Processing and ArtNet DMX. Woodie’s shell and its structural parts were custom-made and developed at our school’s workshops following a process of iteration and testing. Tools and fabrication processes included: vacuum forming, 3D-scanning, laser-cutting and 3D-printing.