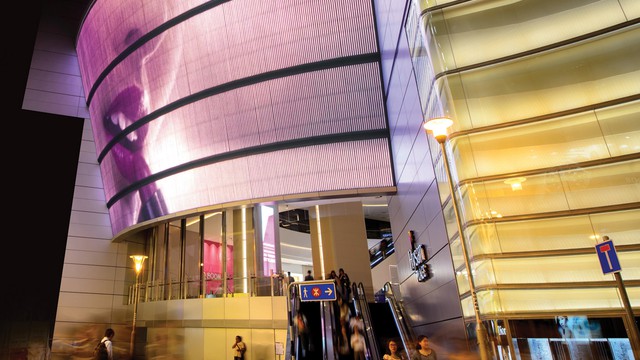 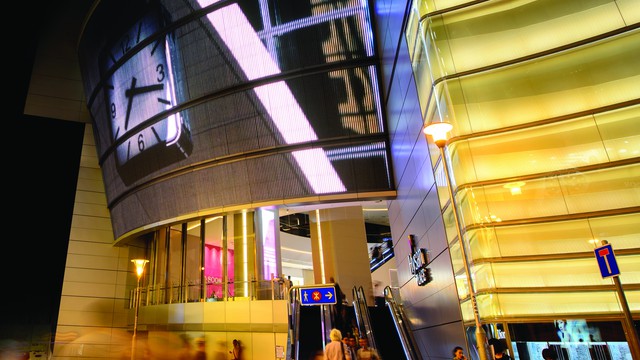 Hysan Place is a flagship development by Hysan, Causeway Bay’s most significant developer of high-end retail and office properties. The Conical Media Wall is a 15 metre high and 24 metre wide 3D puzzle solved by illumination Physics.

Due to the retail competition of the area Hysan Place needed a grand entrance. This led to the Conical Media Wall; an electronic integrated façade which forms the arch at the entrance. The design and construction of the Conical Media Wall was by illumination Physics and Joseph Gartner Hong Kong. The shape was problematic as the overhanging façade is formed in the contour of a truncated and inverted cone 15m high and 24m wide.This created a 3D puzzle that no conventional modular media wall product could match. illumination Physics solved the problem with a linear media wall product IP X-Pipe. It is a linear tubular LED product that is vertically mounted in separate rows. The distance along the vertical pitch of the LED was fixed at 40mm.The distance between the rows varies from 80mm- 110mm to best suit the dimensions. Customisation was required to match the dimensions.The linear product was orchestrated in a way that the width between the modules varied slightly whilst the height followed the wall itself. Although the pitch changes from 80mm at the base to 110mm at the top, the change is not visible as the viewing distance and the effects of parallax cancel out the increase. The change in pitch is adjusted for in the mapping software Xsoft which controls the content played. The concept of the varying pitch solved a problem which allowed Gartner to design the aluminium cladding panels to accept the IP X-Pipe rows in a predetermined way.The panels were created with a mounting channel for the LED,which were fitted on-site after the panels had been erected.A decorative cover plate was then fitted between each row of LED to conceal the mounting brackets. 274 rows of IP X-Pipe were used.The vertical dimension was too long for driver to control an entire row, so the display was divided into 2. 2 drivers were required for each row;1 positioned at the top of the wall & 1 at the base.All of the equipment has been cleverly concealed behind the cladding panels.

Facade type and geometry (structure) : The entrance in overhung by a conical wall which is both curved horizontally and tapered vertically. In is wider at the top than the base by about 20%.The geometry is everything for the conical wall. In order to cope with the expanding cone, the vertical linear media strips vary in horizontal pitch, 80mm Centres at the base and 100mm pitch at the summit.The effect is perfect – parallax in reverse.

Kind of light creation : The conical media wall is used as a visual magnet for the main entrance. Hysan place is set in the heart of the most expensive retail real estate in Hong Kong. The content is a mixture of art and overt commercial messages using the stylish campaign material of the five star brands who ate the tenants of the podium.

Resolution and transmitting behaviour : The closest achievable view of the conical wall is close at 15 metres and the furthest at 150 metres due to the constricted views from the narrow surrounding streetscape. The media is always in shade and therefore the low power LED display is useable in the afternoon. The light output is closely managed to avoid limit light trespass.

Pixel distance : The vertical pitch of the media wall is 40mm and the average horizontal pitch is 90mm.

Urban situation : Hysan place is a massive new development surrounded by narrow streets that are remnant of the old Hong Kong. A place of great contrast.

Description of showreel : The content is typical of the type of imagery used on a daily basis.