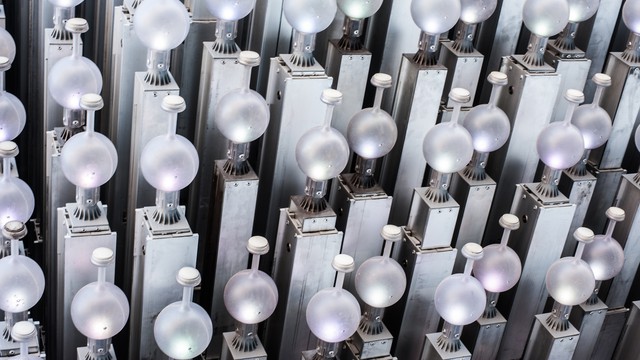 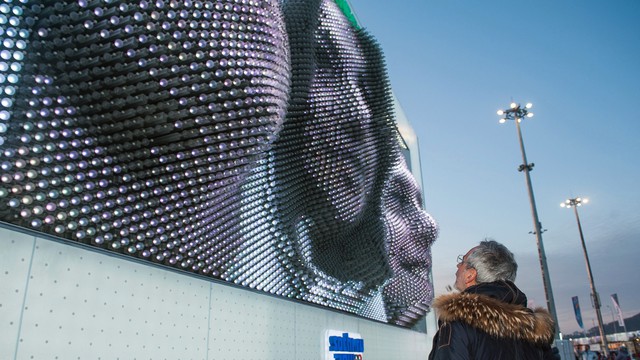 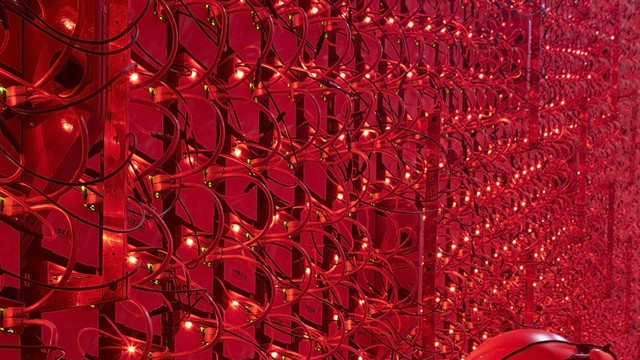 MegaFaces is a cross platform project conceived and built at the Sochi 2014 Winter Olympics. A monument to celebrate the Everyman. It is a three-dimensionally actuated large-scale LED screen.

The interest was to create a monument to celebrate people, regardless of their status, age, nationality, sexuality or gender. For thousands of years people have used portraiture to record their history on the landscape, buildings and through public art. We are a long way from the days of Mount Rushmore and the epic figurative sculptures of Soviet artists, yet monumental depictions of heroes – whether Presidents or the aspirational ‘Everyman’ remain captivating. Today the internet is how we record our history. Emoticons, Selfies, FaceTime – the face persists as the simplest way to communicate emotion. Formed by 11,000 actuators the kinetic façade of MegaFaces is able to transform in three dimensions to recreate visitors’ faces at monumental scale. Facial impressions are relayed to the façade from proprietary 3D photo booths within the building and across Russia. A queuing system manages the data and visitor names are displayed on screens indicating the time their face will appear. An algorithm transforms the faces on-the-fly considering day lighting, scale, rotation and colour. Every actuators is tipped with a translucent sphere that contains an RGB-LED. Connected in a bidirectional system each actuator can be controlled individually and report back its position. Each actuator acts as a pixel within the façade and can extend by up to two meters to form a three-dimensional shape or change colour as part of an image or video that is simultaneously displayed on it. The resultant portraits appear three at a time, at 8m tall - a magnification of 3500% - larger than the Statue of Liberty’s face. Over 150,000 giant Selfies,of people from 106 countries were shown on the façade over the period of the Games.

Facade type and geometry (structure) : Kinetic façade measuring 18 x 8 m consisting of 10,477 telescopic actuators arranged in a trigonal grid. There are 100 modules containing 128 or 64 individual units. The actuators are made from custom aluminium profiles. Hardware is integrated into the back end of the actuator, where power and data connections are made, facilitating ease of maintenance.

Kind of light creation : Custom made RGB LED integrated within a frosted polycarbonate sphere located at the tip of each actuator. The sphere diffuses the light and distributes it evenly across each of the 10,477 pixels of the kinetic façade. The LEDs are able to change colour as part of an image or video that is displayed on the façade.

Resolution and transmitting behaviour : The resolution of the façade was relatively low compared to digital screens. However considering the scale of the screen, 18m x 8m, the façade’s resolution ensured sufficient facial recognition for visitors. 10,477 pixels with 110 kW RGB-LEDs.

Pixel distance : A trigonal grid with a vertical pitch of 125mm and a horizontal pitch of 108.25mm.

Luminace : To maximise facial recognition of each portrait a scaling and positioning algorithm was developed which transforms the faces on-the-fly considering day lighting, scale, rotation, form and additional colour. To enable this to function the LEDs required a high level of brightness to ensure visibility at all times during the Games, both day and night.

Urban situation : The MegaFaces pavilion was located in the Sochi 2014 Winter Olympic Park. It was positioned at a prominent location in the Park. Its large scale allowed it to be visible from a distance as visitors entered the Park and moved between the Olympic venues.

Description of showreel : The kinetic façade displayed the three dimensional portraits of visitors to the MegaFaces pavilion. Russians and people who where not able to visit the Games could also participate by attending one of the 3D photo booths located in eight different cities across Russia. Portraits appeared three at a time, at 8 meters tall - a magnification of 3500%.