+++ (read +³) is a LED audiovisual sculpture that synthesizes the urban crosses: mobility through the city layers, city data and electromagnetic waves fluxes closely related to the fabric and rhythm of the metropolis. 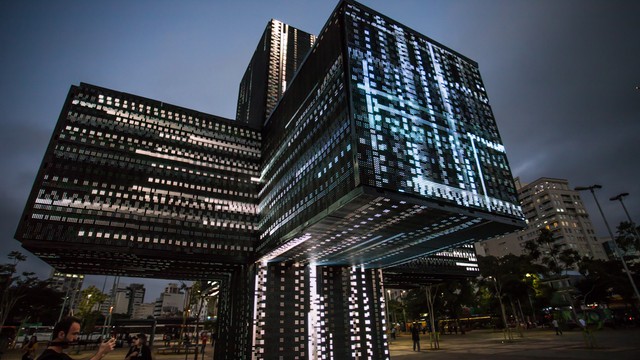 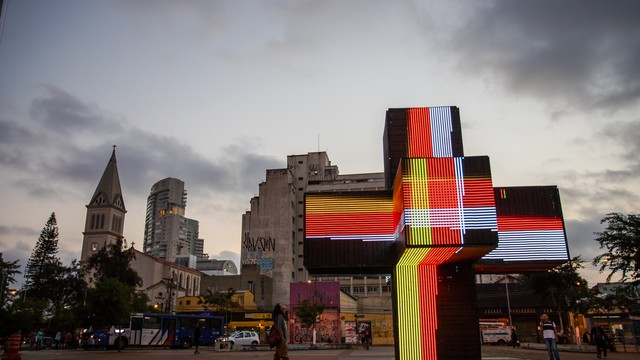 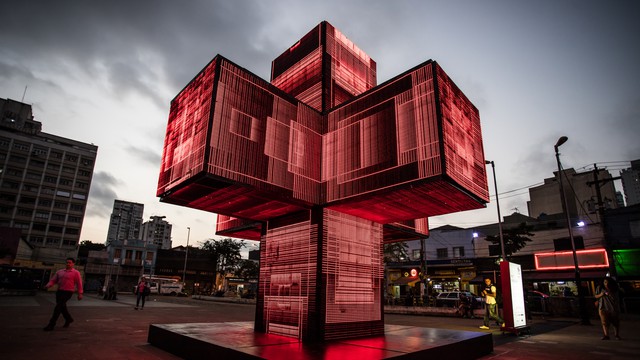 Audiovisual installation by the Brazilian visual artist Muti Randolph commissioned by the curator Marília Pasculli for the SP_Urban Digital Festival. Three-dimensional cross-shaped sculpture made of iron structure, LED panels, audio system and specific generative software for the transmission of uninterrupted audiovisual content related to urban mobility, invisible flows (city data) and their intersections. The SP_Urban festival mission is to provide channel for cultural dissemination as an integrated part of the city, merging art, architecture and technology.

+++ is a one-month urban intervention project that was financed by a brewery company (AmBev) to reinforce the international road safety campaign known as "May Yellow". As it was a capsule edition of SP_URBAN DIGITAL FESTIVAL others issues related to urban culture and local social aspects were addressed and discussed with the artist throughout the creative process. The three-dimensional LED carving refers to the intersections of the 'Largo da Batata' region, where thousands of people use the most varied means of locomotion. The audiovisual installation - with a base of 30 m² and 6 meters high - is a synesthetic architecture, an exercise in fluidity where an image created by it merges with the platform to create illusions of flows of people and data intimately related to the fabric and urban rhythm of the metropolis. The visual content in constant flows of color and light transmitted on a three-dimensional media platform proposes a critical reflection on the growing influence of digital media technologies in daily urban life. Our current urban experience is going beyond the physical world. Smartphones and wireless networks have dramatically changed the way we perceive and interact with our environment. The data, which are now scattered and covering cities, affect our relationship with spaces, as well as our interpersonal relationships. The work +++ instigates the reflection of how our human capacities are adapting to an environment in which the layers between real and the virtual cross, overlap and fuse in increasing rhythm. The audiovisual sculpture, consisting of dozens of LED cross-shaped panels, has visual content generated by software created by the artist himself. For this project the audio tracks were created previously and the videos generated after many tests at the sculpture and saved to create the loop-program. One set during the day and another during the night due to the brightness of the contents being seen differently according to the natural light

Urban situation : The location has one of the main bus terminals of the city, it houses a subway and bicycle station. It is the most well known case of city gentrification, the works of urban restructuring lasted a decade. It connects two noble areas of the city, has been marginalized for the past decades, sheltering houses of clandestine prostitution, mixing rural and popular merchants with illegal street vendors.

Description of showreel : There were 6 distinct audio-video pieces, abstraction animation. Long lines and overlapping squared elements were relate to the Sao Paulo’s city blocks and avenues. Others video contents were related to the digital culture, emphasize the non stop city rhythm, even when the city streets are empty the city and the citizens never stops generating data.

Community or communities involved : The ‘ +++’ Installation were very important to instigates and attract people to the center of the square any time of the day/night, changing the regular ‘flux’, local citizen circulation. It allowed the integration of people from the most varied social functions and cultural background, such as skaters, homeless, executives, nightlife and bar lovers, students, etc. It created a ‘security aura’ due the luminosity and impressive dynamic visual impact. It was possible to establish a visual connection with passersby at a large distance. It was a meeting point during the time that was exhibited

Issues addressed : Road safety, intersection and flows of people through the city, mobility and urban security, digital culture, city data, crossing of real and virtual layers in urban space. How urban digital art is capable of changing the social dynamics of city areas. How urban digital art can improve the citizen experience in areas where public policy is not efficient.

Impact : During the week approximately 250 people climbed the floor scenography for closer appreciation (pictures, selfies, perceive the sound, immersive visual impact, etc.) and read the banner info or asked the others in order to know what it was about. During the weekends it was impossible to measure the number of people, as there were hundreds of people standing around the work from 20h until 3h.