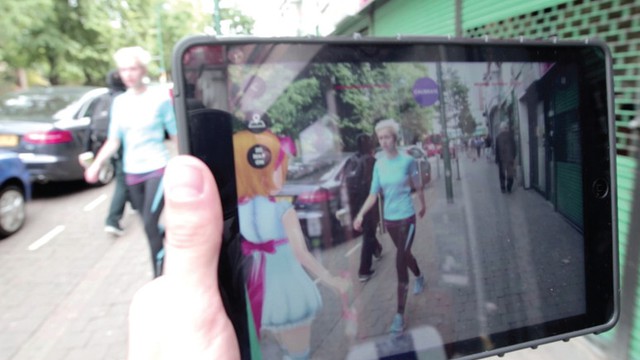 The Augmented Urban Reality Project demonstrates a new urban AR experience beyond simply overlaying points of interest, floating post-its or 3D models on a display. It provides visual and spatial orientation, and an immersive and intuitive experience. The approach supports a physical and digital spatial narrative as people move between the various art trail points.

Facade type and geometry (structure) : The aim is to create new spatial and social narratives and engage people with invisible aspects of their environment through the animated character’s movement and behavior.

Resolution and transmitting behaviour : In the Augmented Reality View, the user follows a walking 3D digital character, which guides the user in the exact direction of selected places, following a defined route. The character responds to the users’ movements, altering its pose, speed and animation based on the users distance.

Urban situation : the system chooses the shortest path between the user location and the selected places and shows a path over a 2D map. In the AR View the user has the choice to enable or disable a 2D map overlay, registered to the real visualized world