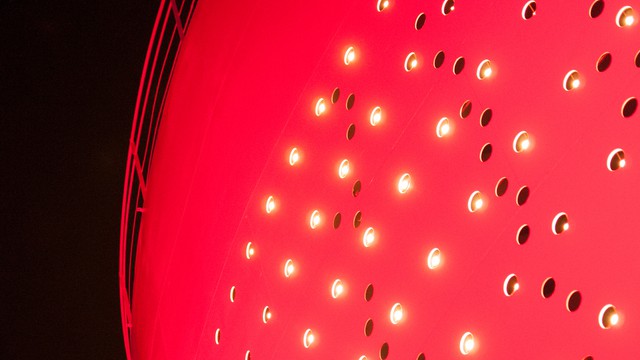 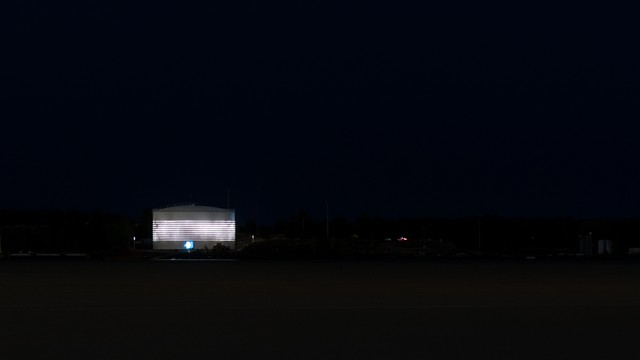 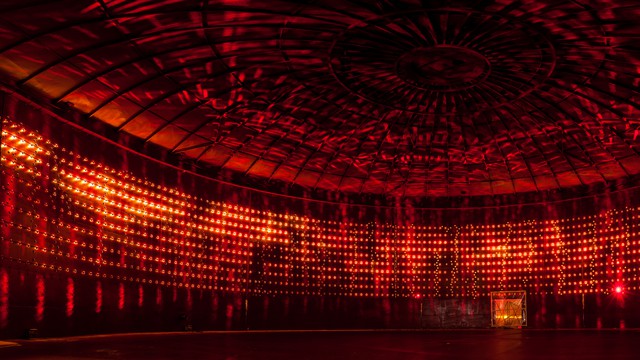 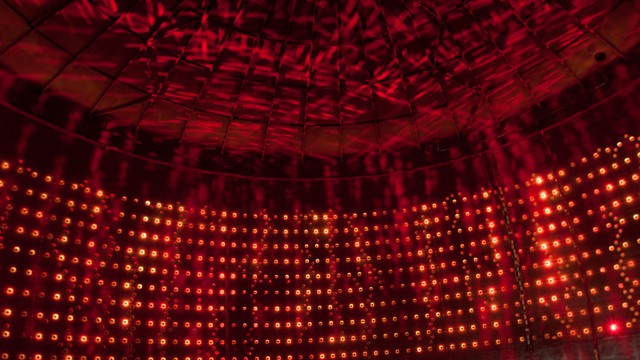 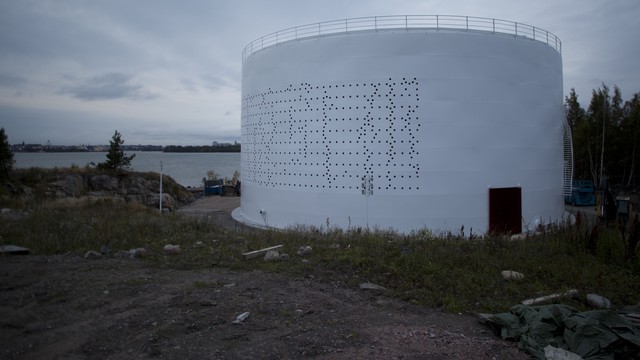 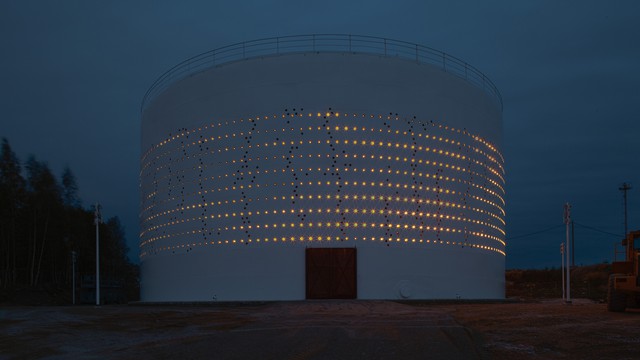 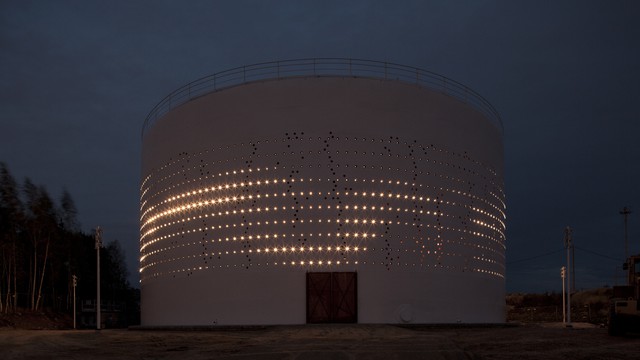 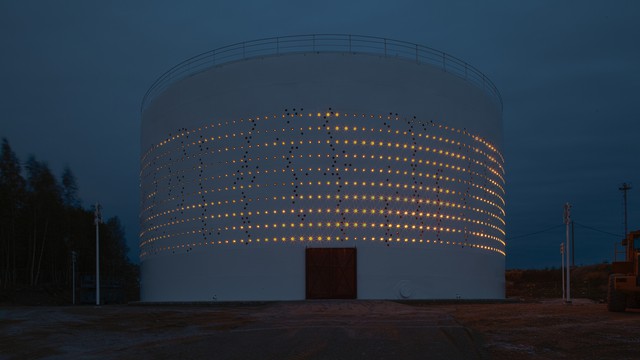 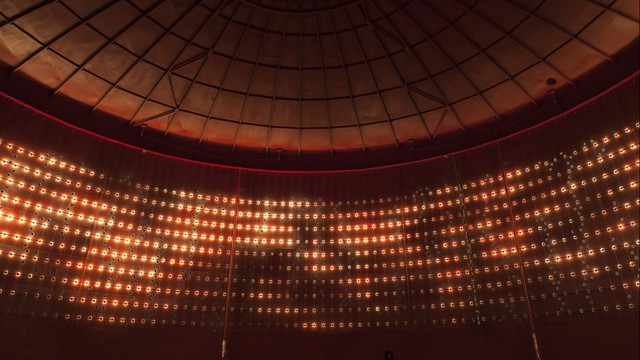 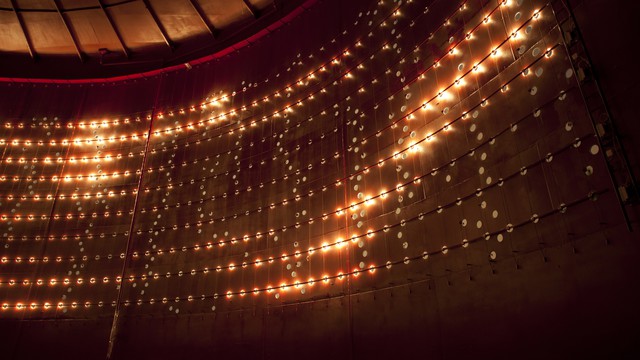 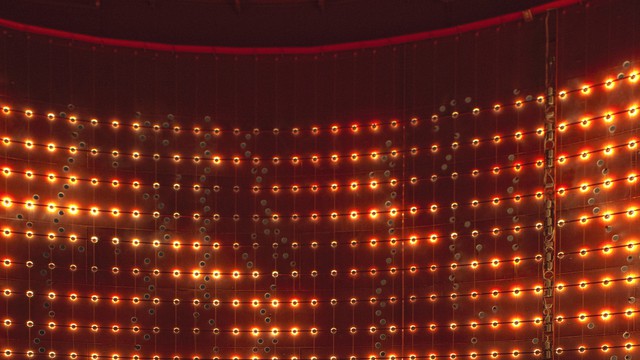 Large scale permanent light art installation and a new civic space for city of Helsinki has been created by the sea in the former industrial area of Kruunuvuori. The piece uses natural light as well as parametrically controlled white LED lights to suggest a connection to its surroundings in real time. Officially launched on 10th October 2012 the light art intervention signifies the start of a large urban redevelopment of the area into modern residential zone for 11000 people.

Architectural lighting design firm LDC (Lighting Design Collective S.L.) was awarded a prize to realize a permanent urban light art piece in Helsinki, Finland - an official project for Helsinki World Design Capital 2012. The art piece converts a disused oil silo into a wondrous light display and a civic space. Public will gain access to the vast interior of the 35m diameter 16 meter tall steel silo which will be dark red inside. Sunlight will fill the space with dappled shadows creating a spectacular daytime space. At night 1280 white LED´s flicker and sway on the surface of the silo controlled by a bespoke software mimicking swarms of birds in flight – a reference to silo´s seaside location. The prevailing winds, well known to those living in Helsinki, are used to trigger different light patterns in real time. ‘The enduring fascination of the complex movement of light and the amazing location by the sea will make this a captivating experience for the visitors and the residents of Helsinki’ Tapio Rosenius the Director of LDC say. Silo 468 is placed in the future district of Kruuunuvuorenranta, a new city development of Helsinki. Itwill be both a cosy residential area and an attractive recreational area for all Helsinki inhabitants.

Facade type and geometry (structure) : Existing steel wall has been perforated with 2012 circular holes, cut to 150mm diameter. The perforation logic and aesthetic has been derived from the old rust stains that were visible in the original façade surface. In addition a regular grid has been laid with the abstract pattern giving location for the LED grid.

Kind of light creation : Single colour 2700K white LED matrix within a domed fixture. 9 LED's per dome. The luminaire is a custom variation of a standard product. Outside floodlights are populated as Red, White, White LED floods. Fixtures are used predominantly with 2700K white light with Red wash appearing only at midnight.

Resolution and transmitting behaviour : Low resolution - 1280 LED domes are suspended with specially made steel wire &amp; bracketry system inside the silo facing out through the circular holes.

Luminace : Medium brightness - façade only used from Sunset - 15 minutes until 02:30.

Urban situation : Building sits in a former industrial area facing out towards the city centre. Key views include ferries and boats passing the building in this busy port area. Visibility was designed for max 4 km but is more in reality.

Description of showreel : Custom made software based on swarm intelligence and various logarithms generate the content in real time. The bird swarm like movement is varied parametrically with live inputs from wind speed, wind direction, temperature, clarity and snow fall. Software monitors a simple RSS feed with the above data and launches parametric changes accordingly.