A Pavilion with a “chameleon skin” light façade. 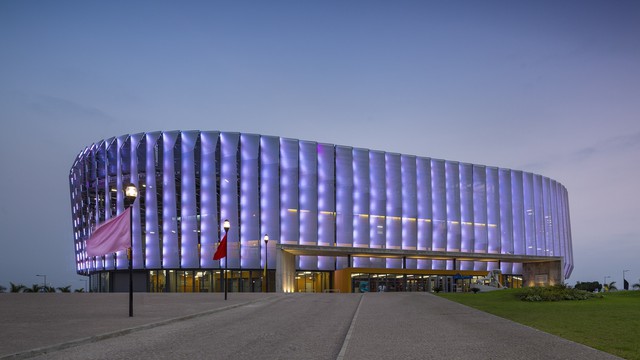 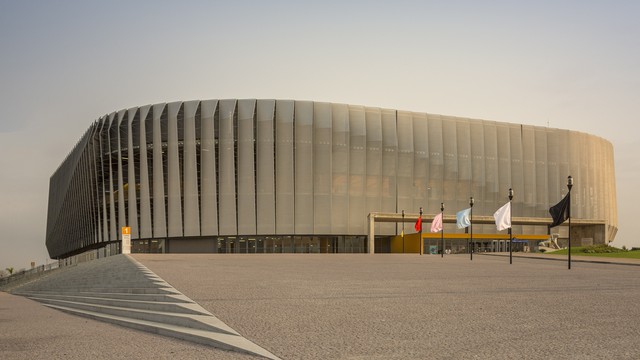 To keep the costs low and to build fast modular elements were developed. Their modularity is animated by the placement of these elements as “scales”. This effect is complemented by the addition of a vertex to the outer edge of each element, and by the variation of the height in which it is placed. This results in an undulating pattern that seems to envelop all the pavilion. The LED lighting that these elements receive further reinforces this formal effect at night, with varying color and intensity, giving even more expression to the iconic character of the pavilion. All the horizontal circulations of the upper levels of the pavilion are organized as peripheral external galleries. The climatic characteristics of Luanda make this solution possible, reducing the energy consumption that an enclosed solution would imply, and using the galleries as an active element in the natural ventilation of the internal spaces and as a first line of protection against the elements. In order to ensure the effectiveness of this solution, the shading of the galleries needed to be ensured and their exposure to wind and rain reduced. For that purpose modular elements were developed, comprising a metallic structure that gives support to a tensioned perforated canvas – the so called “scales”.

Facade type and geometry (structure) : The façade is composed of modular elements, comprising a metallic structure that gives support to a tensioned perforated canvas, the so called “sails”. Their modularity is animated by the placement of these elements as “scales” that, according to the different angles from which they are observed, seem to be isolated entities and expose the interior space, or overlap each other, hiding it.

Pixel distance : Distance between luminaires varies because of wing shape, in order to obtain light uniformity. Has 10X1m luminaires lights per each one 18m wing.

Urban situation : The site is located on a satellite area of the city, next to Luanda expressway and across from the national football stadium. These two facilities are the seeds for an urban development dedicated to the promotion of sports in Angola. Meanwhile the building stands alone and shows its colors in all 360 degrees.

Description of showreel : The building façade presents highly dynamic color transitions, including references to the national teams jersey color schemes and other effects.