Dynamic media façade in the heart of Copenhagen 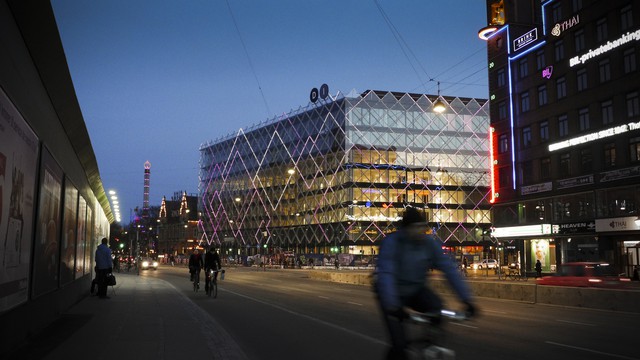 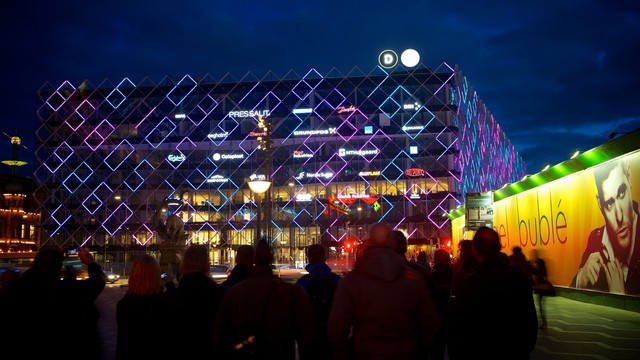 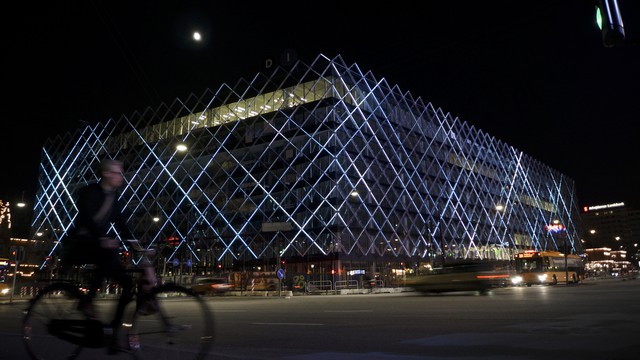 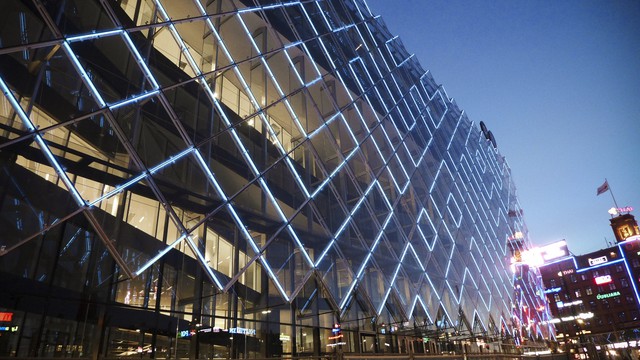 In May 2013, The Confederation of Danish Industry (DI) moved back into their rebuilt headquarters at Raadhuspladsen in the heart of Copenhagen. The extensive architectural task has been carried out by Transform who has redesigned the physical manifestation of the DI. The new exterior part of the building consists of a great media façade, as a beacon of aesthetics in a sea of visual noise flowing in and around one of the most heavily trafficked intersections in Copenhagen. A team consisting of Kollision, Martin Professional and Transform worked with DI in designing and developing a language of light in line with the DI brand, exploiting the diagonal nature of the LED-structure on the façade.

The new exterior part of the building consists of a 4,000 m2 media façade, as a beacon of aesthetics in a sea of visual noise flowing in and around one of the most heavily trafficked intersections in Copenhagen. The different light designs have been turned into generic plugins that fit into Kollision’s player-system. These light plugins can be controlled by the graphical department at DI who can tweak and modify parameters like speed, colors, and direction creating thousands of different expressions - still within the limits of each plugin. The team behind the project has worked on developing a design manual for how the dynamic content of the façade can change during day, night, seasons and special occasions. As part of the media façade Kollision created the interactive plugin, 'Urban Canvas' that allows by-passers to interact with the façade by using their smartphones. By entering a mobile website, users can paint on the façade by swiping their finger across the touch screen of their smart phone, instantly painting with light on building. Multiple users can use the system simultaneously; creating a busy and playful collaborative artwork that keeps on changing. The ‘Urban Canvas’ was developed in dialogue with DI and implemented for the first time at ‘Culture Night 2013’ in Copenhagen.

Facade type and geometry (structure) : The media façade incorporates 4,000 meters of Martin Professional's VC Strip in a customized outdoor solution. Exploiting the diagonal nature of the LED-structure on the façade, the harlequin pattern across the entire building are formed into a variety of graphic designs.

Kind of light creation : The LED strips are full-color RGB LED battens with each LED (over 80,000 in total) individually controllable in terms of color and intensity. The entire setup allows the client organization to use the façade as a dynamic interface between the brand, the building, and the urban setting it is situated in.

Resolution and transmitting behaviour : All light designs can be previewed in the 3D player system displaying each of the +80,000 LEDs before adding them to the scheduling system. The system holds potentials for adding interactive components, allowing the citizens to interact directly with the façade as e.g. the Urban Canvas.

Luminace : Medium brightness - the façade is used from sundown to sunrise

Urban situation : Located on the busy town hall square in Copenhagen, the façade of DI follows the daily rythmn of the pulsating city creating a dialogue with the surroundings.